at the May Artswalk – two poets meet and read, Karla, the keeper of the dream and Zoe

telling of a new dream, a new day…. I sit mesmerized by the both of them, the sound of

their voices, the meter of their words, strung together into an enduring shape of memory.

Study Karla’s layered page on page and perfect hand stitches across story and image. A 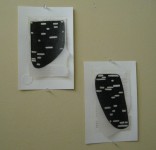 The day after…Mandalas, lots of them, on beautiful big concrete walls with natural light streaming in – what is an artist not to like about that scenario?
Thank you to all my friends, friends I just met yesterday, and all who stopped by to walk the building and see the art, stop and chat, learn more about the concept and energy behind this series. This exhibit will be up at 1330 Exchange Street for a full year, so whoever sees this blog, I hope you get a chance to stop by sometime over the course, and see for yourself the synergy between architecture and art. – Rachel 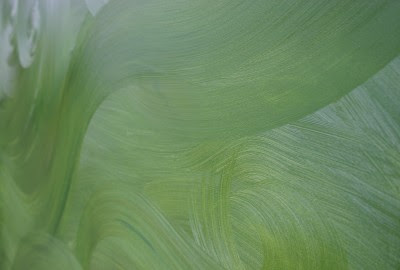 In honor of the blood of St. Valentine…

All art in the Main gallery is predominately red and black

Maybe a heart or two mixed in…. 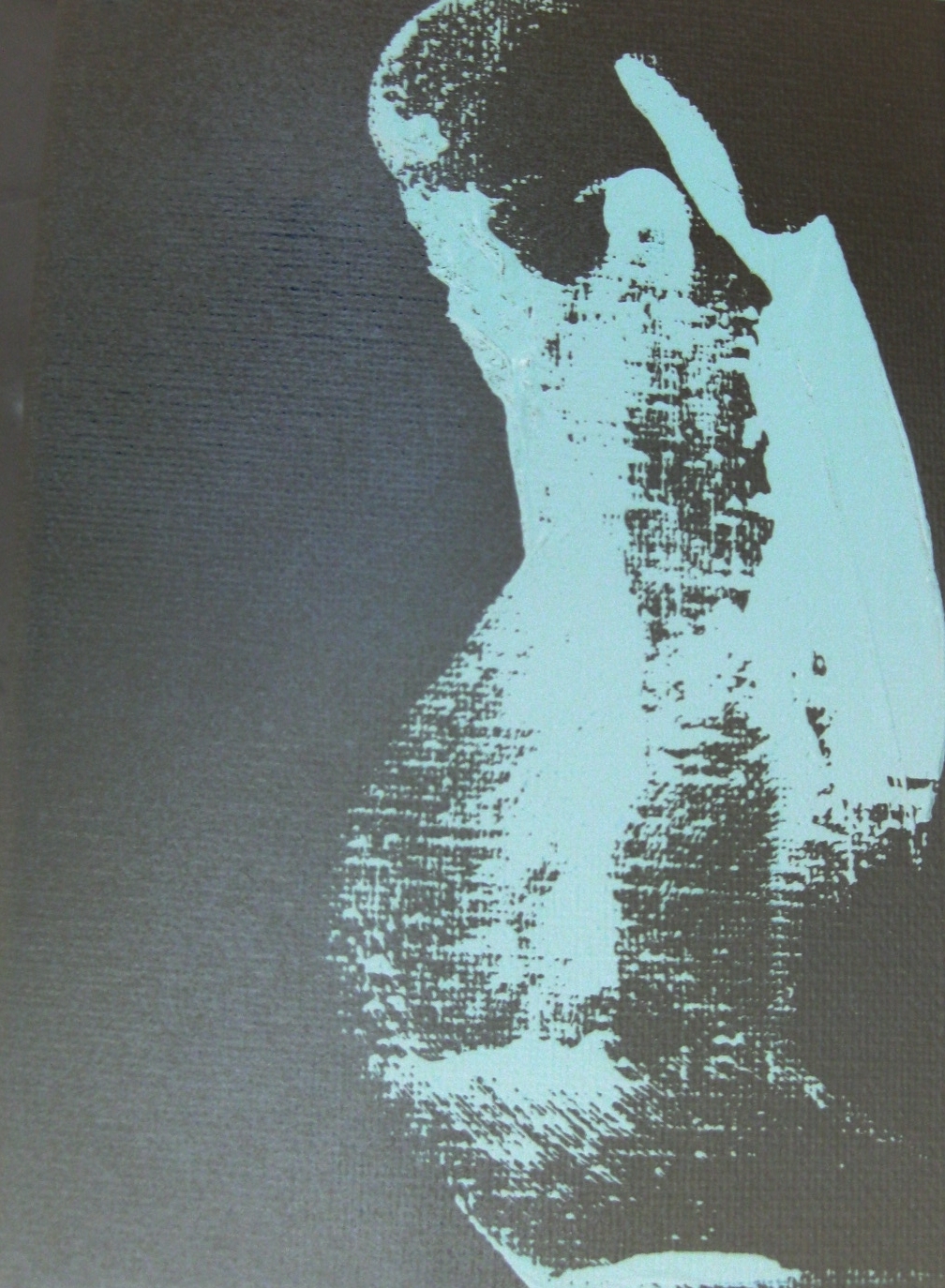 Come One and All
On Tuesday, March 11th 6-9 – at the Chilmark Tavern, Pathways Presents will be hosting Renga in the Round, Round Two – I will be facilitating the evening – it is open to anyone who would like to come and write free form group renga poetry with me. Last year was a hoot! We had so much fun. I am looking forward to another spontaneous evening of creatives sitting around the table. We write together for roughly an hour, then read the collective poems we have created out loud. All are welcome.

White and gold, frankincense, myrrh…. It is January and out the windows everywhere white, gobs of white.  In the gallery reflecting off all this light are the shimmer of a golden desert sky (implied), the movement across desert and time, cosmos and one bright star to follow – MAGI Jan. 6-30.  Come and be inspired. 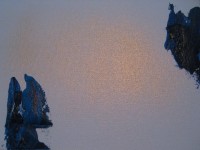 Mary is definitely in the House….waking up, surrounded by Mary, what a powerful way to move through December – images of the mystical mother, the Virgin of Guadalupe, her namesakes in the flesh, all were at the gallery this past Saturday night, and what a joyous celebration of Mary it was – A feast for the eyes and a table overflowing with all manner of holiday gustatory pleasures.  We made merry long past the open studio hours and there was a sweet and steady arrival of friends and art lovers throughout the event.  Graziella Weber-Grassi’s sublime collages  fill the Main Gallery – from “Dizzy Mary” – featuring the Virgin with a gold tinsel halo on a psychedelic background to” Japanese Mary” – a more classic image surrounded by Japanese text, crepe paper and pleated cartoon sheets .  Once again showing her unique style and brilliant retro-surrealist vision – yes I am gushing – come and see for yourself  and be truly amazed – open Monday- Friday 8-6.   To view the riot of new mixed media Mary’s in the great, room, feel free to phone for an appointment.  The show runs through December 30th.  All of us at Zone Three wish you a Very Mary Christmas! 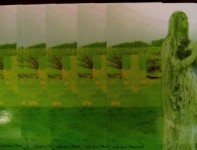 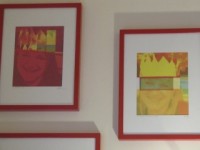 Just having spoken with Klara – who is always so full of creative juice, she makes me look to the endless possibilities in life, I am moved to share a recent interview with her – please read on past the end of the blog/intro for the full article.  With a life time of beautiful work to her credit, endless expansion and vision, and still being such a productive artist that she makes us all look like we are moving in slow motion,  Klara leads the gallery towards the beginning of Autumn and the bustle in town of a new school year beginning.  Appropriate, since she spent a large portion of her life in the classroom and is still the person to take a lesson from, as well as be inspired by.  In forming the vision for her show Allegories, I am reminded of the deep well that is formed through abstraction.  Peering into the open doorway of Three Reds, I see Klara and Vienna in the 30’s, I hear the music of her life spilling out an ever changing symphony. 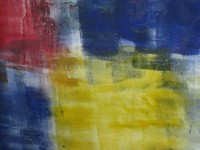 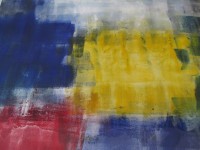 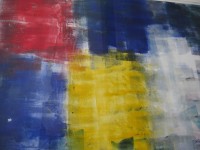 Klara Calitri is a VT based Austrian multi-media artist.   A true renaissance woman, at 91, Klara speaks several languages and employs many art forms.

I recently sat down with Klara in her studio for an interview.  She described snapshots of her life, a succession of events that has lead her to Vermont and what she sees as a natural evolution in her life as an artist.

She began, “What you saw as a child and liked stays with you for the rest of your life.”  The refinement and sensibility evident in her work thus remains forever linked with Austria.

Born in Vienna in 1922, Calitri still draws inspiration from her Viennese background and childhood experiences:   As a teenager sent to study languages in the Moravian Highlands of Czechoslovakia.   Fleeing Nazi occupation in 1939 on a midnight train to Switzerland, Her family immigrated to New York City.  While on Scholarship to St. Michael’s University in Burlington, meeting her future husband Junius that summer at Orchard Beach – he was an Olympic swimmer, and lifeguard champion who taught her how to win a swimming medal.  Post World War II – While attending Cornell University, where she earned her Master’s Degree, She describes bi-monthly trips back to NYC.  In their beat up 34 Chevy, gas rations saved up, her Canary in the back of the car.  The car leaked when it rained – they had to cover the canary with a tarp.

Then came a life filled with children, teaching, and the layering of many art forms and experimentation into multi-media.

Drawing from her love of Asian art and the memories of fine European porcelain, she has created a number of works with these delicate elemental qualities.  However, Calitri is no one trick pony; letting the medium determine where she goes with it.  She describes her love of mixing it up and mastering new techniques:”  “Each work of art dictates its own life.”  On painting, “The story comes out of the brush, you have to let it come through, listen to the painting forming itself.  On delving into porcelain, “Such an intimate detailed process.”  She mentions Picasso mixing ceramics with his paintings, “Many of the great artists who had any kind of brain were multi-disciplined, otherwise, you get bored.”  On her love of variety, “My use of multi media is an extension of my personality:  My loves, likes, even dislikes, and most significantly, my deep involvement with and reaction to nature.”

This leads us to her discovery of the monotype process and resulting works.  Calitri’s monotype prints on paper offer a uniquely pre-modern glimpse vis-à-vis modern landscape.

When creating the Allegories series, Calitri deftly employed a process of richly layered printmaking she learned under the tutelage of renowned printmaker Sarah Amos.  In this environmentally friendly method, natural substances such as oils and techniques such as gravure scaring are employed to avoid the use of toxic chemicals in the printmaking process.  Each print is created by hand on a large etching press.  Successive layers of patterned image are laid down while the surface is still wet.  Within the complex formation of these patterns, a new language emerges in which Calitri reveals her life story.

“My abstracts are sculptural, palpable works,” Calitri states.  In “Voyage” and “Blue Voyage,” Gravure scarring creates a topographical vision of Lake Champlain, enveloping the viewer with patterns and trails that guide into the past and future of her imagination.

Calitri lets color lead this process, In “Three Reds, Red Mosaic, Shadows and Lost Letters” Calitri establishes a mood by using her affinity for the energizing dynamics of red and grounding with nuances in black to generate portals of memoir.  “Light and City” and “Waterfall” uses structural squares and tones of cooling blue, moving the viewer across a subtle dreamscape.

Calitri adds, “Monoprints are very freeing because you have to do it quickly.  You have to let everything through, listen to the story forming itself.  “Tree of Life” and “Woman” echo experimental mantles ala Rorschach, floating pools of black and white.  Through contrasting pale and warm tones in “Mesa Verde” and “Glow,” Calitri hints at a journey to the temporal Southwest.  She emphasizes, “Abstracts are so freeing, I have an idea that generates the image, but the ensuing art piece becomes many things, depending on each individual’s perspective.”  “A doorway opens wide for interpretation and feeling, connecting to us in a core universal language – through color, movement, light and shadow.”  “I believe this unites all of us in a very concrete way.”  “With realism, people are relating to the familiar and memory; through abstraction, others are willing to go deeper, let their imagination wander a bit, those are our people.”

This article was written by Mirabelle Ross.